As Ant Group seizes the world’s attention with its record initial public offering, which was abruptly called off by Beijing, investors and analysts are revisiting Tencent’s fintech interests, recognized as Ant’s archrival in China.

It’s somewhat complicated to do this, not least because they are sprawled across a number of Tencent properties and, unlike Ant, don’t go by a single brand or operational structure — at least, not one that is obvious to the outside world.

However, when you tease out Tencent’s fintech activity across its wider footprint — from direct operations like WeChat Pay through to its sizeable strategic investments and third-party marketplaces — you have something comparable in size to Ant, and in some services even bigger.

Ant refuted the comparison with Tencent or anyone else. In a reply to China’s securities regulator in September, the Jack Ma-controlled, Alibaba-backed fintech giant said it is “not comparable” to WeChat Pay, the fintech tool inside WeChat, Tencent’s flagship messenger.

“In the space of digital payments and merchant service, there are many players around the world, including Tencent’s WeChat Pay. But the payments services offered by these companies are different from our digital payments and merchant services. They are not comparable. In terms of digital finance, our way of working with and serving financial institutions, as well as our revenue model, are novel and do not have a counterpart,” the company noted in a somewhat hubristic reply.

There’s no denying that Ant is a pioneer in expanding financial inclusion in China, where millions remain outside the formal banking system. But Tencent has played catch-up in digital finance and made major headway, especially in electronic payments.

Both companies ventured into fintech by first offering consumers a way to pay digitally, though the brands “Alipay” and “WeChat Pay” fail to reflect the breadth of services touted by the platforms today. Alipay, Ant’s flagship app, is now a comprehensive marketplace selling Ant’s in-house products and myriad third-party ones like micro-loans and insurance. The app, like WeChat Pay, also facilitates a growing list of public services, letting users see their taxes, pay utility bills, book a hospital visit and more.

Tencent, on the other hand, embeds its financial services inside the payment features of WeChat (WeChat Pay) and the giant’s other popular chat app, QQ. It has thus been historically difficult to make out how much Tencent earns from fintech, something the giant doesn’t disclose in its earnings reports. This is reflective of Tencent’s “horse racing” internal competition, in which departments and teams often rival fiercely against each other rather than actively collaborate. 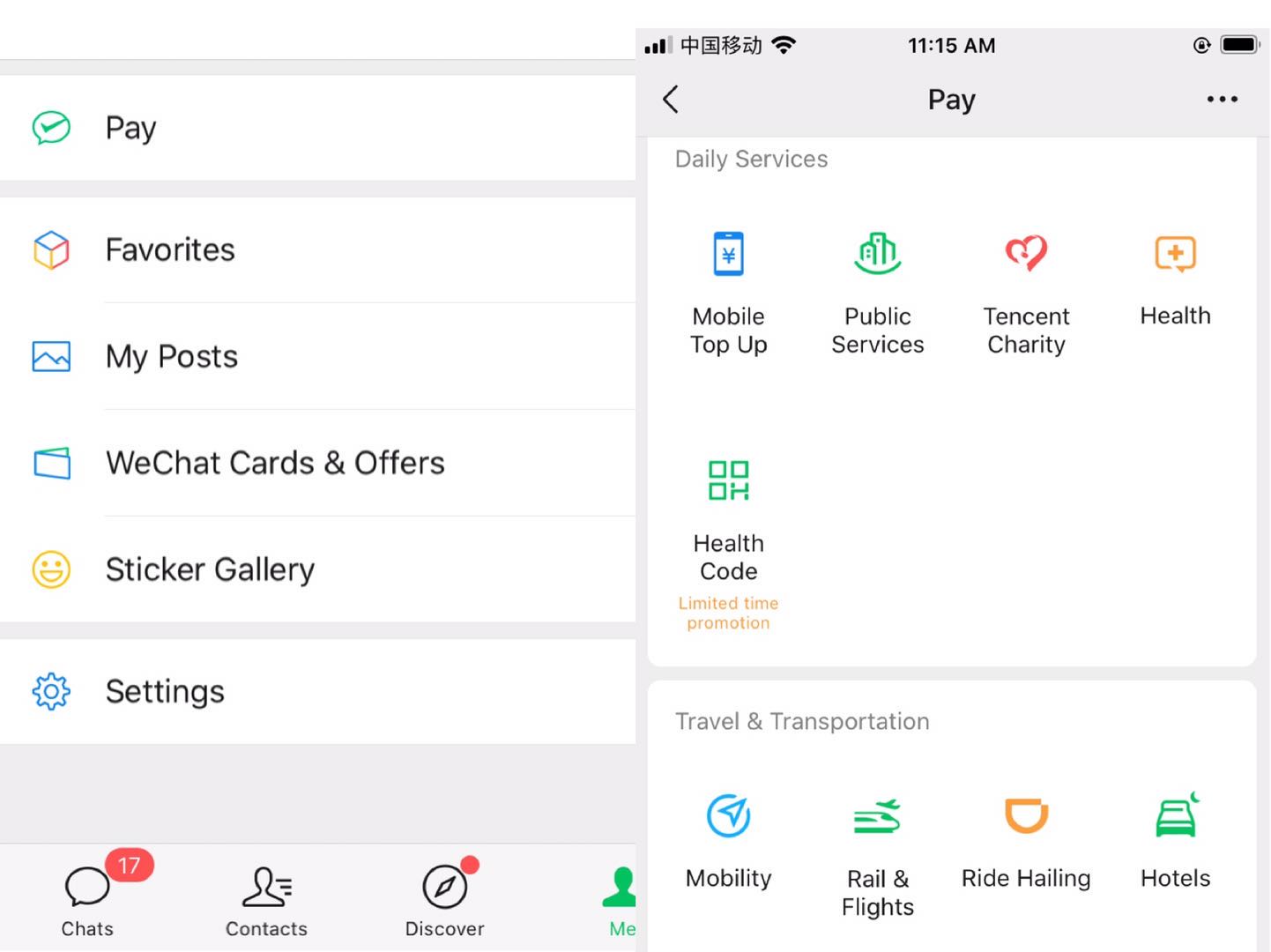 As such, we have pulled together estimates of Tencent’s fintech businesses ourselves using a mix of quarterly reports and third-party research — a mark of how un-transparent some of this really is — but it begs some interesting questions. Will (should?) Tencent at some point follow in Alibaba’s footsteps to bring its own fintech operations under one umbrella?

In terms of user size, the rivals are going neck and neck.

The Alipay app recorded 711 monthly active users and 80 million monthly merchants in June. Among its 1 billion annual users, 729 million had transacted in at least one “financial service” through the platform. As in the PayPal-eBay relationship, Alipay benefits tremendously by being the default payments processor for Alibaba marketplaces like Taobao.

As of 2019, more than 800 million users and 50 million merchants used WeChat to pay monthly, a big chunk of the 1.2 billion active user base of the messenger. It’s unclear how many people tried Tencent’s other fintech products, though the firm did say about 200 million people used its wealth management service in 2019.

Ant reported a total of 121 billion yuan or $17 billion in revenue last year, nearly doubling its sum from 2017 and putting it on par with PayPal at $17.8 billion.

In 2019, Tencent generated 101 billion yuan of revenue from its “fintech and business services. The segment mainly consisted of fintech and cloud products, industry analysts told TechCrunch. With its cloud unit finishing the year at 17 billion yuan in revenue, we can venture to estimate that Tencent’s fintech products earned roughly or no more than 84 billion yuan ($12 billion), from the period — paled by Ant’s figure, but not bad for a relative latecomer.

The sheer size of the fintech giants has made them highly attractive targets of regulation. Increasingly, Ant is downplaying its “financial” angle and billing itself as a “technology” ally for traditional institutions rather than a challenger. These days, Alipay relies less on selling proprietary financial products and bills itself as an intermediary helping state banks, wealth managers and insurers to reach customers. In return for facilitating the process, Ant charges administrative fees from transactions on the platform. 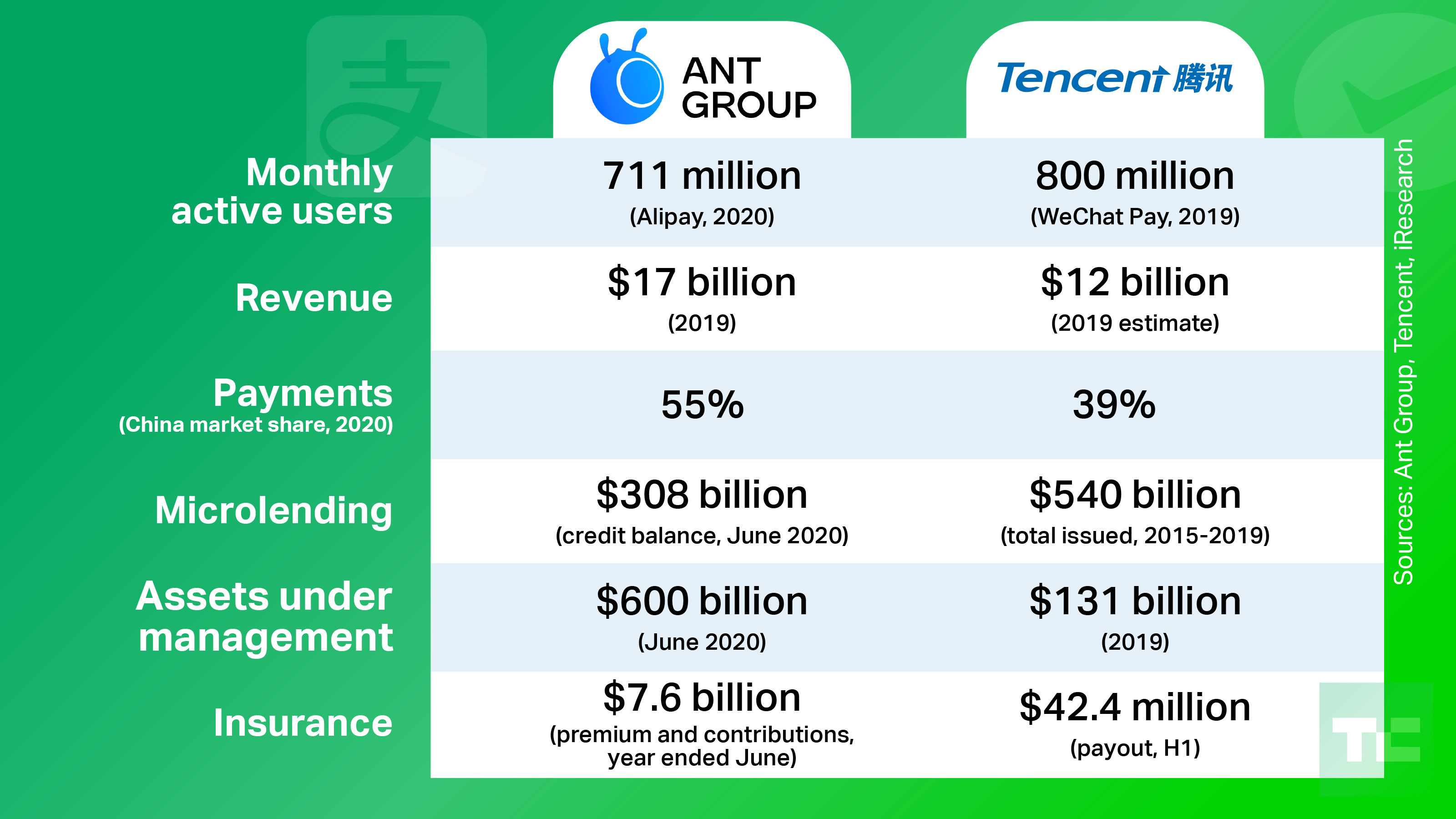 In the year ended June, Alipay processed a whopping 118 trillion yuan in payment transactions in China. That’s about $17 trillion and dwarfs the $172 billion that PayPal handled in 2019.

Tencent doesn’t disclose its payments transaction volume, but data from third-party research firms offer a hint of its scale. The industry consensus is that the two collectively control over 90{69439eabc38bbe67fb47fc503d1b0f790fcef507f9cafca8a4ef4fbfe163a7c5} of China’s trillion-dollar electronic payments market where Alipay enjoys a slight lead.

At the end of the day, the two services have distinct user scenarios. The fact that WeChat Pay lies inside a messenger makes it a tool for social, often small, payments, such as splitting bills and exchanging lucky money, a custom in China. Alipay, on the other hand, is associated with online shopping.

Third-party payments were once an incredibly profitable business. Platforms used to be able to hold customer reserve funds from which they generated handsome interests. That lucrative scheme came to a stop when Chinese regulators demanded non-bank payments providers to place 100{69439eabc38bbe67fb47fc503d1b0f790fcef507f9cafca8a4ef4fbfe163a7c5} of customer deposit funds under a centralized, interest-free account last year. What’s left for payment processors to earn are limited fees charged from merchants.

Ant has become the go-to lender for shoppers and small businesses in a country where millions aren’t qualified for bank-issued credit cards. The firm had worked with about 100 banks, doling out 1.7 trillion yuan ($250 billion) of consumer loans and 400 billion yuan ($58 billion) of small business loans in the year ended June. That amounted to 41.9 billion yuan or 34.7{69439eabc38bbe67fb47fc503d1b0f790fcef507f9cafca8a4ef4fbfe163a7c5} of Ant’s annual revenue.

The size of Tencent’s loan business is harder to gauge. What we do know is that Weilidai, the microloan product sold through WeChat, had issued an aggregate of 3.7 trillion yuan ($540 billion) to 28 million customers between its launch in 2015 and 2019, according to a report from WeBank, the Tencent-backed private bank that provides the WeChat-based loan.

Last but not least, both giants have made big pushes into consumer insurance. Besides featuring third-party plans, Alipay introduced a new way to insure customers: mutual aid. The novel scheme, which is not regulated as an insurance product in China, is free to sign up and does not charge any premium or upfront payment. Users pay small monthly fees that are pooled to pay for claims of critical illnesses.

Insurance premiums and mutual aid contributions on Ant’s platform reached 52 billion yuan, or $7.6 billion, in the year ended June. Working with about 90 partner insurers in China, the segment contributed nearly 9 billion yuan, or 7.4{69439eabc38bbe67fb47fc503d1b0f790fcef507f9cafca8a4ef4fbfe163a7c5}, of the firm’s annual revenue. More than 570 million Alipay users participated in at least one insurance program in the year ended June.

Tencent, on the other hand, taps partners in its relatively uncharted territory. Its insurance strategy includes in-house platform WeSure that works like a middleman between insurers and consumers, and Tencent-backed Waterdrop, which provides both traditional insurances and a rival to Ant’s mutual aid product Xianghubao.

In the first half of 2020, WeSure, Tencent’s main insurance operation that sells through WeChat, paid out a total of 290 million yuan ($42.4 million), it announced. The unit does not disclose its amount of premiums or revenues, but we can find clues in other figures. Twenty-five million people used WeShare services in 2019 and the average premium amount per user was over 1,000 yuan ($151). That is, WeShare generated no more than 25 billion yuan, or $3.78 billion, in premium that year because the user figure also accounts for a good number of premium-free users.

Moving forward, it remains unclear whether Tencent will restructure its fintech operations in a more cohesive and collaborative way. As they expand, will investors and regulators demand that? And what opportunities are there for others to compete in a space dominated by two huge players?

One thing is for sure: Tencent will need to tread more carefully on regulatory issues. Ant’s achievement is a win for entrepreneurs looking to “disrupt” China’s financial sector, but its halted IPO, which is tied to regulatory issues and reportedly Jack Ma’s hubris, also sounds an alarm to contenders that policymaking in China can be capricious.